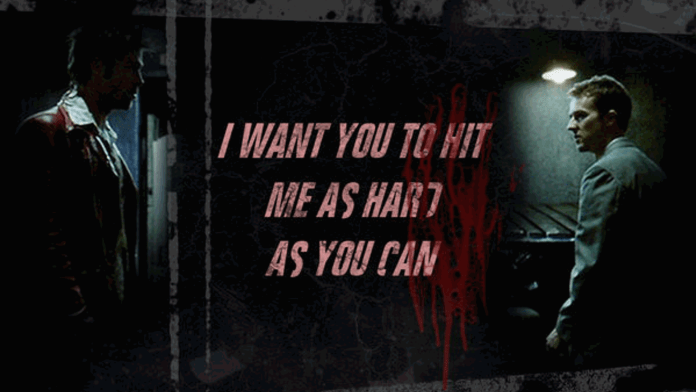 Do you have what it takes to send an audience to their feet? In this 4th post in our Self Promotion series, we look at the last 15 seconds of your pitch and help you land your next adventure.

The other day, I was flipping through the channels and came across the Brad Pitt “classic,” Fight Club.  It has been a while since I watch the entire movie, and I want to start by saying … if you are about to watch Fight Club on cable… DON'T!  Anyone who has ever watched Fight Club knows that all of the fun moments are stripped away for a PG-13 viewing audience.  Anyway …

In the movie, the two main characters, Brad Pitt and Edward Norton decide “together” (spoiler alert) to start a ritual of physically destroying each other night after night.  The scene starts with Brad's character, Tyler Durden, approaches Edwards character, listed only as “The Narrator.”  He says “I want you to hit me as hard as you can.” It is at this point in the movie that I really can't include much of the dialogue in this post due to the nature of the conversation, but let us just agree that there is a little physical struggle between the two characters.

The beauty of the scene isn't in the testosterone filled violence of the scene, rather than the message that this one single sentence brings out about the two characters.  In this scene, Tyler (Pitt) didn't just ask to be walloped in the face, he firmly insisted to be hit “as hard as you can.”

When we are faced with that one moment where we are selling ourselves, it is most important to first assess the room, but secondly (and more important) not leave anything on the table.  When showing off who you are and what value you can bring to the table, it's important to hit your audience as “hard as you can.”

In this fourth post in the “How to promote yourself” series, we are examining the last and most critical part of your sales pitch.  We will be looking at the last 15 seconds.  A vital 15 seconds, in which you either hit your audience as hard as you can or leave them hanging.  If you have not yet checked out the other posts in this series, please take a moment and work your way through the entire series.

The Art of The Closing 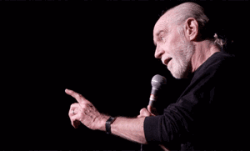 If you want to learn how to close a speech and leave your audience wanting more, my advice to you is to start doing some homework and research.  I find the best places to learn about giving presentations isn't by watching other presentations, rather, by watching stand up comedy.  When I was preparing for my TEDx Talk, I watched a TON of comedians get up on stage and do their routines.  I watched the greats, and I watched the newbies.  I studied how they stand, how they walk on and off, and most importantly, how they ended. A good ending can erase all doubts created from a weak opening.  Think about all of the major speeches you know.  Was it the first words that you remember, or the last few words?  What is it about the ending?  How do you get there?

Learning from the Politicians

Recently, I found myself sitting through countless hours and speeches during both the Republican and Democratic National Conferences.  All of the good ones had a very similar formula.  Take Bill Clinton's speech for example.

In his speech, which lasted for about 43 minutes, Bill Clinton took the principles I have been writing about and brilliantly expanded on them in a way that very few people on the planet can.  Let's take a quick look.

Bill talked at length about his wife Hilary in great detail.  He discussed her childhood and how they first met.  He attempted to connect Hillary to not only the middle class but the working class of America by stressing her family and where she came from.  For about 20 minutes, we learned not only who Hillary was, but why she was willing to fight for our country.

Bill then went on to discuss some of the issues that have happened in our country over the last 30 years and how Hillary was the readiest and available person to lead the country moving forward.  He outlined several key moments from working with Health Care to the takedown of Bin Laden and identified how she was a key figure in those global activities.

The speech then moved into reasons why Hillary would be a great president and he shared some of the topics that are very meaningful to her.  He mentioned that she would be working hard to fight for not just one group of people, but all Americans.

His speech ended with a standing ovation as he encouraged voters to go out and support Hillary.  He stressed that all people, not just Democrats will benefit from having Hillary in the White House. At the end of the speech, everyone was enjoying themselves and cheering for the candidate.

It's important to have a strong closing to your speech.  It's important that they are not only left knowing that you are the perfect candidate for the position, but that you are willing to go the extra mile for them and can take on any given challenges. It's also important not to say too much.  At this point, you need to set up your audience to ask you questions.  You should be prepared that the first thing they are going to ask you is probably something from your opening. If you are telling your audience that you are going to save the princess and that you are the only person capable of doing this, you might have to be prepared with a question such as: “Have you saved any princess before today and if so, how did you do it?”

Being able to take charge of the room, or interview is exactly what separates an experienced speaker from a novice one.  Body language is also important.  Have you ever seen a speaker give their pitch on a show such as Shark Tank? The good ones finish their pitch and stand proudly in front of the judges waiting for feedback and questions.  The bad ones show their lack of confidence by slouching and often you can see the sweat start to come out.

Although I have said this phrase on multiple occasions within this series of posts, I feel the need to say it again.  “The Most Important Thing” you can do when pitching yourself is to show confidence. Don't be phony. Don't be something you are not.  People can see right through this.

Congratulations, you have read the last 4 blog posts and you have a pretty good idea of how to make a pitch and sell yourself in just about any situation.  What's next?  In my next post, we will take a look at the hidden seconds that you can magically create for yourself to put the cherry on top of any good pitch.  Please take a moment and subscribe to my newsletter(s) for more information about this valuable subject.

I hope you are enjoying this topic and that you are finding this posts helpful.  If you are, please leave a comment below. I would love to hear form you and hear your stories.

For more information, please visit my new website: JeffreyBradbury.com.  I would love to work with you.